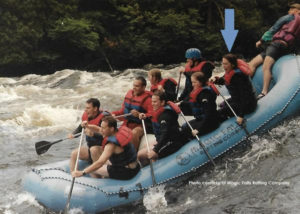 If you haven’t already, it’s a good time to think about how you can simplify, leverage and work smarter as we cruise into another new year.

Years ago, I went on a white water rafting trip with some buddies up in The Forks of Maine (yep, that’s me in the back under the arrow). The first day we paddled our arms off through class IV rapids on the Kennebec River. There’s something so thrilling about eight people sitting on the edges of a rubber raft paddling in unison as big water tosses you around like a cork. It takes great focus on doing the ONE thing that’s going to get you down the river without falling out or flipping the raft. As long as you paddle at the right time and stop paddling at the right time, you’ll avoid going for a violent swim.

On day 2 of our trip we went rafting on the Dead River. Even though the water on the Dead River seemed tamer than the Kennebec, we made a paddling error that pinned the side of our raft against a huge boulder in the middle of the river. The water pushed the ends of the raft around the boulder as we all tried to scramble to the top of the rock but one by one we all tumbled into the water.

I’ll never forget the rapids pushing me down and smashing me into the rocky riverbed. I couldn’t believe how fast I was moving compared to how slowly our raft seemed to be going downstream just moments ago. I popped out of the water just in time to see that I had missed my chance to get into another raft. Other rafts were within my sight but they felt miles away as I rapidly drifted downstream.

And I finally realized I was just floating along. No wonder I was at the mercy of the shockingly swift current.

I swam like a mad woman until I felt someone hoisting me out of the water and into a raft. I was stunned and exhausted.

I was also alive. Damn that was close.

Many entrepreneurs experience this with their business. They get pushed down and around by external forces and find themselves far away from where they thought they’d be.

This time of year you may be picking up your head only to realize you’ve drifted away from where you intended to be at the start of the year.

If you feel that you’ve drifted off course, stay tuned. In the next email I’m going to give you guidance and an action plan to help you get back on track now so that you can go avoid swirling around in an eddy in 2017.

If you’d like to minimize your drift and take control of your business like the boss you already are, take advantage of my free Simplify Your Business Session.