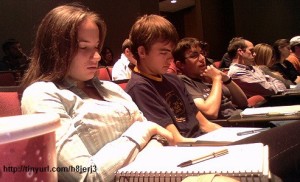 After doing four back-to-back story workshops in two months, I realized that entrepreneurs get just how valuable story can be for their businesses.

No one needs convincing.

And yet many of the coaches, consultants and creative entrepreneurs I talk with often feel like their stories don’t pack quite the punch they want.

What I’ve found is that we have a TMI (too much information) problem. And it’s not the TMI you might be thinking.

One of my story workshop participants is a visual marketing and online expert. She’s given me permission to share a part of her story with you so you can see what I mean.

Two years into my business, my friend Bryan – a web designer – punched me in the gut with the truth.

I spent a solid year and half getting my website to a point I was happy with. I poured hours upon hours of time and energy not just building my WordPress Masterpiece, but learning how to build it in the first place.

That one simple comment pierced my pride, shattering it to pieces.

In my mind, my business was a high quality, innovative, visual marketing agency, but my website was more like a project that the high school student next door had created.

Notice she didn’t begin with the typical “I was born in Boston, Massachusetts and was fascinated with images and words since I was 2 years old” (because who isn’t fascinated with words and pictures from the moment their born?).

Instead, she gives us action, emotion and specific details to feel like you are standing in her shoes (who hasn’t felt like their website sucked at some point?). She also hits on some core human needs that most people can relate to . . . respect, achievement and self-esteem.

In one paragraph, you get huge insight into my client’s character, without her actually saying, I’m the kind of person who strives for excellence and innovation.

Now compare this with the opening she initially shared with me.

At almost two years into my business I heard the words that no entrepreneur or business owner ever wants to hear, and they were, “No offence, but your website sucks”.

When my web designer friend, Bryan said that to me I winced in pain.

My pride took a big hit because it took me a good year and a half to get my website to a point I was happy with. Only to have someone majorly insult the hours and hours of work I had put into my WordPress Masterpiece.

Not only did I build the site on my own, but I taught myself how to be a WordPress master – or so I thought.

She’s saying the same thing but there’s a difference, right?

Here’s what it is and where entrepreneurs often get tripped up.

One opening leads with a specific incident and powerful metaphors that instantly sparks that gut-wrenching emotion of embarrassment. The other takes more time building up to it. There’s only a few extra words in the second example but it doesn’t suck you in as quickly as the first.

I’ve made this mistake too (until my journalism professors and copy editors beat it out of me — more on that later).

That’s because we have this desire to give people all the background information. So we include ALOT of detail in the beginning of our story. And even though details are important, if your audience could care less about those details it’s easy to lose them. By the time you get to the juicy stuff, your audience is already fiddling with their smart phone to see what’s happening on Facebook today.

So here are four things to keep in mind the next time your telling your story:

1.Introduce characters — In the story above, we meet my client’s friend Bryan before we even get to know her. And because Bryan is brutally direct and honest with her, it sucks us right into her story. If he had said something like “Can I give you some advice?” instead (way too polite & vanilla), the audience would care nearly as much.

2.Start in the middle of the action — While it’s true that stories need a beginning, middle and end, that does not mean you have to tell your story in chronological order. What’s more important is to connection emotionally with your audience from the beginning, so think about the one moment you can begin with that will snap your audience to attention and hook their brains and hearts. Keep it simple, set the tone or simply be shocking.

One of my favorite opening lines of all times is this one from Hunter S. Thompson at the beginning of Fear and Loathing in Las Vegas.

We were somewhere around Barstow on the edge of the desert when the drugs began to take hold.

It hits you square in the eyes that you’re about to take a wild ride with this crazy gonzo journalist.

3.Only include what matters most to your audience — There’s a saying in journalism school that goes like this “Don’t bury the lede”and that applies to your story too. In other words, don’t make your audience slog through a bunch of unnecessary details that happened, but that they don’t need to know.

4.Show, don’t tell — Use a specific moment, sensory details and powerful metaphors to create a vivid image in your audience’s mind.

Need more help crafting your compelling, client-converting story? Apply for a complimentary consultation today and learn how you can better connect with your audience and grow your business by sharing your powerful personal story.