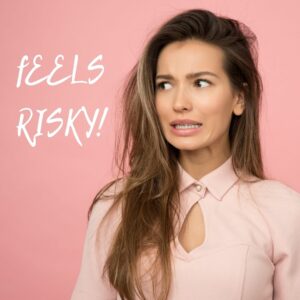 I recently worked with an author and community-builder with what most people might call a “good problem to have.”

Marjorie’s Facebook group recently exploded from 2,000 to 5,000 members in a short period of time. She was putting lots of energy into nurturing the group and providing valuable resources because she wanted to make a positive impact on their lives. She felt excited, as well as a bit overwhelmed by all of this.

Marjorie sensed that there was untapped potential for her to now receive back from this community, yet she felt anxious about asking for their support. She was giving, giving and giving, but not receiving much in return. Ultimately, this left her feeling drained and frustrated.

(Maybe you can relate?)

Marjorie was clear on her goal to sell more copies of her latest book, and have readers tell other people about it. At the same time, she didn’t want to “be salesy” (i.e. ask for what she clearly knew she wanted — people to buy and share her book).

She also felt that some of the people in this group would be interested in her newest book, even though it branches beyond what she’s already known for. At the same time, she was worried about alienating people by sharing it in the group because this new book covers territory that’s deeply personal and edgy, not only for her, but the general public.

Marjorie was clear about what she wanted, and already had a sense around how to go about getting it, yet she couldn’t bring herself to ask.

Having an audience of thousands, who are loyal followers and potential hot buyers, may not sound like a problem at all, right?

The problem appears when the fear of being judged and making someone upset gets in the way of you receiving for your contribution. And that’s NOT a great problem to have, but that can be resolved.

Marjorie admitted to me that asking for support from the group felt risky.

When I asked her Why does this feel risky?

She said, The worst thing for me is being accused of being selfish.
Somewhere in Marjorie’s past experiences she was called out for being selfish. That old hurt and pattern was running the show here, preventing her from selling more copies of her fourth book and sharing the new book.
In other words, her wounding was protecting her from being accused of being selfish, which was blocking her from asking for, and receiving, the support she knows she desires.
We did some work around this in a Bold Heart Visibility Breakthrough session that has helped Marjorie shift from feeling frustrated and anxious about the unequal give and take with her group to feeling certain and positive about inviting members to show their gratitude and appreciation for her contributions.
This is what she shared after our session:

Before our session, I struggled with turning the relationship with my group from one in which I am doing all the giving to receiving support back and creating more balance. Now I have tools to help the members of my group understand how they can support me. Scary, vulnerable, and really important. You “got” what was going on even before I could articulate the ideas clearly. I left our session with a new outlook and concrete steps that feel doable and not “sales-y”. I invited group members to help me beta read my newest book. Five have responded already. I feel so much clearer about what I can do now. Thank you.

So what about you?

Do you struggle to ask for support?

This is just one way our wounds can keep us hiding in the shadows and holding back from the spotlight in our business.

However, if you haven’t or you have a hunch that old thoughts, beliefs and patterns are keeping you invisible in your business, let’s explore whether or not there is a fit for us to work together.